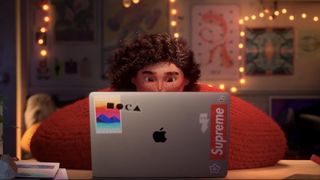 Apple has dropped its holiday season ad, and it’s a heartwarming Pixar-style affair. Titled “Share Your Gifts,” the commercial shows a young woman working in her downtime on a MacBook decked out with Supreme and DFA Records stickers. She keeps printouts of whatever it is she’s making hidden away in a box before a gust of wind blows it out of her window and into the world.

Compared with last year’s commercial, the 2018 ad has little by way of Apple branding, but the theme links back to the company’s ongoing “Behind the Mac” campaign.

Watch the clip above and let us know what you think in the comments.

Apple Celebrates the History of MacBooks in Anime With an Adorable New Ad
DesignsponsoredFebruary 29, 2020

The Highsnobiety Holiday Gift Guide
The Best Gadget Gifts for Splashing Out With
SelectssponsoredDecember 10, 2019