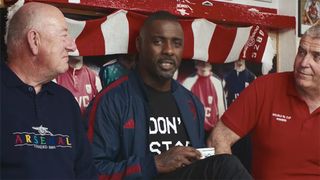 Arsenal has officially unveiled its new home kit for the 2019-20 season, the Premier League club’s first since returning to adidas, its kitmaker in the ’80s and early ’90s.

The Gunners, most recently tied to PUMA, will play in the Three Stripes for the next five years, with the value of the deal believed to be worth around $385 million. The last adidas Arsenal kit was 25 years ago during the 1993-94 season.

To accompany the announcement, Arsenal has released a tongue-in-cheek video (above) that sees star players including Mesut Özil and Hector Bellerin speak in dubbed North London accents. Look out for cameos from Idris Elba and club legend Ian Wright.

The jersey is in traditional Arsenal red with white sleeves and features a back trim. The throwback V-neck collar lends a touch of old-school class, recalling the club’s kits from 1986 to 1990. The main sponsor continues to be airline Fly Emirates.

You can buy the new kit over at adidas.

Here Are the Best adidas Sneakers of 2019 (So Far)
SneakerssponsoredFebruary 19, 2019

Here’s How to Get 50% Off adidas Sneakers & Apparel
SelectssponsoredDecember 6, 2019
Follow
Highsnobiety Style
What To Read Next
Load More
Search Results
Load More