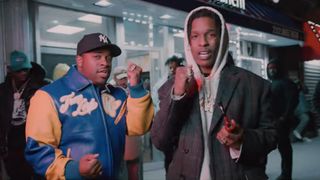 Hitmaker Mike WiLL Made-It was tapped to curate and executive produce the soundtrack for Creed II. Back in November, he dropped the song “Runnin” featuring A$AP Rocky, A$AP Ferg, and Nicki Minaj. Now, the producer has unleashed an action-packed music video for the dynamic track.

Creed II: The Album is out now. Watch the full visual above.