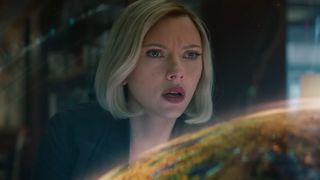 After teasing an Avengers: Endgame featurette this past weekend, the hype for the final chapter of the “Infinity Saga” is well underway, as Marvel Entertainment just dropped the first full teaser clip from the upcoming superhero flick, which premieres nationwide on April 26.

“We owe it to everyone not in this room to try.” Watch a brand-new clip from Marvel Studios’ #AvengersEndgame.

In the one-minute teaser, we see some of the members of The Avengers including Captain America (Chris Evans), Bruce Banner/Hulk (Mark Ruffalo) and Thor (Chris Hemsworth), along with newcomer Captain Marvel (Brie Larson) devising a plan to acquire the Infinity Stones and undo the Thanos’ snap which eliminated half of the population in the universe in Avengers: Infinity War. Black Widow (Scarlett Johansson) is seen remarking that Thanos used the Infinity Stones again for something.

While Captain America, Captain Marvel and Black Widow are on board to take the fight to Thanos once more, Colonel Rhodes/War Machine (Don Cheadle) and Bruce Banner are both skeptical. However, Captain Marvel’s confidence prompts Thor’s approval, which eventually gets everyone else on board.

Once more Avengers: Endgame hits theaters on April 26 and you can start purchasing tickets below.

The Dropcast
Here’s What The New ‘Avengers: Endgame’ Footage Will Include
MoviessponsoredJune 20, 2019