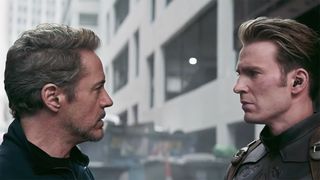 Tickets to Marvel‘s fourth and final Avengers outing, Endgame, are now available to buy, and we have a brand new special look trailer to mark the occasion. Watch above.

Standing united for one last time, the trailer kicks off with a sober warning from Bruce Banner. “If we do this, we’d be going in short-handed,” he says, to which Rhodes replies, “Yeah, you mean, because he killed all our friends?”

The minute-long offering is packed with new footage, including Captain America and Iron Man repairing their trust and — while standing alongside a cloaked character that could either be Thor or a resurrected Doctor Strange — arriving on another planet (potentially Titan) to take on Thanos.

Avengers: Endgame hits theaters April 26. Buy your tickets here — but be quick, it looks like theater sites are already buckling under the pressure.

Tickets booked for opening day! The first showing of 3 that I will attend within the first fortnight of its release ? #AvengersEndgametickets

Good job @AMCTheatres @RegalMovies @atomtickets @Fandango all apps/sites are down in the mist of Endgame tickets going on sale. Seems like the servers couldn’t hold. #AvengersEndgametickets