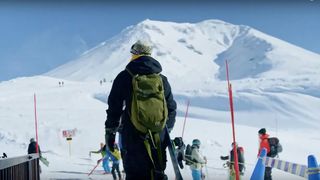 Beyond Medals has just dropped its first episode of a three-part video series about the crew’s exploits snowboarding, surfing, and skateboarding. The first part, ICHIBAN, is a six-and-a-half-minute clip documenting Beyond Medals’ snowboarding adventures in Japan.

After the follow-up episodes have come out, Beyond Medals plans to drop a full snowboard/skateboard/surf movie in fall called BRONZE AGE. In the meantime, watch the Beyond Medals crew cutting up pristine powder in the video above.

The clip also features some of Beyond Medals’ merch. According to Instagram, the label’s sixth drop is on its way this month.

Black Lives Matter
Here Are the Ways You Can Help Support Protesters in Minneapolis and Beyond
LifesponsoredMay 30, 2020

McDonald’s & Beyond Meat Are Bringing Plant-Based Burgers to Canada
FoodsponsoredSeptember 26, 2019
What To Read Next
Load More
Search Results
Load More