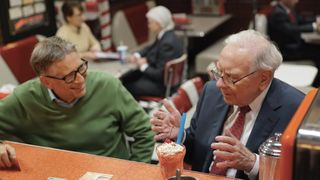 Who doesn’t want to see two of the world’s three richest men (according to Forbes) shoot the breeze in a candy store?

In the video above, Microsoft founder Bill Gates joins investor Warren Buffet at Hollywood Candy in Omaha’s Old Market to discuss their early business inspirations and their favorite childhood treats. Titled “Sweet Nostalgia,” the video shows the pair running the rule over different childhood candies, playing pinball in an arcade, and browsing the racks of a record store while discussing Glenn Miller and Willie Nelson.

Speaking about the video, Gates wrote: “We’ve been close friends for more than 25 years, and we have just as much fun together now as we did when we first met. In all that time we have never run out of things to talk about and laugh about.”

To join in on the lighthearted action, check out the video above.