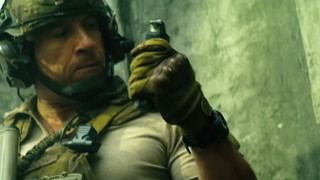 Today Sony Pictures gives us our first look at its new comic book adaptation, Bloodshot, starring Vin Diesel. The film is directed by Dave Wilson and written by Eric Heisserer and Jeff Wadlow.

Diesel portrays Ray Garrison in Bloodshot, a soldier who was recently killed in action, but is miraculously brought back to life by the RST corporation. Now referred to as the superhero Bloodshot, he has nanotechnology pumping through his veins, making him self-healing and nearly immortal. The company, however, remains in control of not only his body, but also his mind and memories, leaving him questioning what’s real and what’s not.

Press play above to get your first look at Vin Diesel as Bloodshot. The movie, which is due out February 21, 2020, also stars Guy Pearce, Eliza Gonzalez, Sam Heughan, and Toby Kebbell.