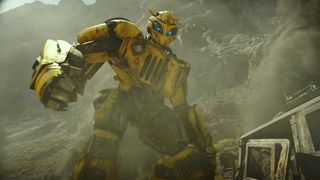 Travis Knight has been tasked to direct the new Transformers spinoff prequel, Bumblebee, set roughly 20 years before the events of the Shia LaBeouf-starring original picture. Hailee Steinfeld and John Cena take over the lead roles in the upcoming action thriller, as Steinfeld portrays a California girl named Charlie, who befriends Bumblebee, a transforming Volkswagen Beetle.

While plot details are scarce, the initial trailer highlights the introduction between Charlie and Bumblebee. Press play above for your first look, and be sure to check back with us for more surrounding the Transformers prequel, due out this Christmas.

Next, you’ll want to watch the terrifying, wordless trailer for Amazon’s ‘Suspiria.’

Watch the First Trailer for BTS’ ‘Bring the Soul: The Movie‘
MusicsponsoredJuly 6, 2019