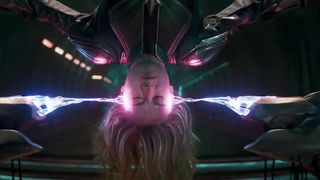 “I’m not going to fight your war. I’m going to end it.” So says Brie Larson’s Carol Danvers in the fierce second trailer for Captain Marvel. Watch above.

This strong second offering delivers a much closer look at what we can expect from Marvel‘s first female-focused superhero movie, and much of that appears to be spent working out exactly who Captain Marvel is, where she’s from, and where she acquired her superhero powers. It also features her punching an old lady in the face, as well as some pretty huge intergalactic battle scenes.

Captain Marvel’s standalone movie was first teased at the end of Avengers: Infinity War and her arrival coincides with the end of the MCU‘s third narrative phase, which will be capped off with Captain Marvel and Avengers 4. But to find out exactly what the end will look like, we’ll just have to wait and see.

Captain Marvel arrives in theaters nationwide on March 8. Will you be watching? Let us know in the comments.

In other news, ‘Daredevil’ is the latest Marvel show to be canceled by Netflix.