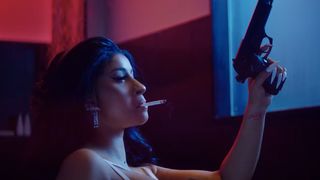 Cardi B just dropped the video to accompany her track “Press,” which dropped back in May.

The visual sees Cardi in various stages of the legal system, beginning in a police station, then heading to court to defend herself against her detractors, and finally ending up in prison. Given Cardi actually appeared in court this week to face felony assault charges, it feels particularly timely.

The rapper also appears virtually naked in a troop of similarly undressed dancers, covered in nothing but blood. Despite her spitting the line “Cardi don’t need more press” throughout the chorus, this clip ensures she will certainly get just that. Watch the video above.

Cardi B Takes Shots at the “Press” in New Track
MusicsponsoredMay 31, 2019