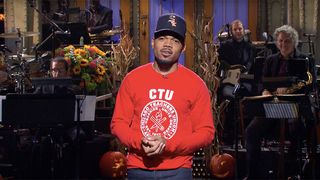 This past weekend, Chance the Rapper made his return to Saturday Night Live, marking his second time hosting the comedy show.

While wearing a Chicago Teachers Union sweater, the rapper opened with a monologue showing support to the ongoing teacher strike, before delivering a hilarious “Second Best” rap song showing love to all his favorite second bests — including his beloved Chicago. Watch the hilarious rap-monologue above.

As expected, Chance also appeared on a number of sketches, playing characters such as a highly-judgemental “Judge Barry” and a dancer who’s rehearsing for Earth, Wind & Fire. He even brought back a character from last year’s hosting, an NBA correspondent, who’s now forced to cover an e-sports match. Chance’s hosting duties come after he revealed his desire to launch a comedy career back in September.

The rapper also delivered musical performances, from “Zanies and Fools” to “Handsome,” for which he was joined by Megan Thee Stallion for her first-ever appearance on the show.

Watch all the best moments from Chance the Rapper’s SNL hosting below.