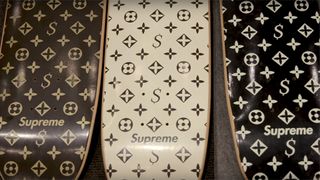 Famed auction house Christie’s is currently auctioning off its largest collection of Supreme ever. Launched under the title Handbags X HYPE, the Supreme items are featured alongside the most comprehensive selection of limited-edition handbags ever presented at auction.

The auction represents a significant moment in the house’s 253-year history. Christie’s expert curation of Supreme product alongside some of the world’s most valuable handbags imbues the New York brand’s product offering with a sense of provenance and collectability that sits comfortably next to pieces crafted by legendary French houses.

The breaking of barriers between luxury and streetwear is something Highsnobiety has written about obsessively over the past 15 years, with our deepest dive yet on the subject occurring last year with the publication of our first-ever white paper, The New Luxury. Highsnobiety followed this white paper up with an entire book dedicated to the subject that, much like this auction, demonstrates how brands like Supreme took influence from the best of luxury fashion and combined it with subcultural codes to create product that had never been seen before. Christie’s Handbags X HYPE is the hammer coming down and acknowledging that New Luxury has infiltrated the rarefied world of elite auction houses.

The collection begins with the Copyright Boards, the very first set made by Supreme in 1998, and continues to the present day with 230 individual skateboards. In total, nearly every design ever produced by the brand is featured in the auction. Among the offerings are full sets by John Baldessari, George Condo, Damien Hirst, KAWS, Jeff Koons, Ryan McGuiness, Marilyn Minter, Takashi Murakami, Richard Prince, Peter Saville, and Christopher Wool.

Supreme products sit alongside extremely rare handbags by Hermès such as a matte white Himalaya Niloticus Crocodile Birkin 30 with palladium hardware; a limited edition black calfbox leather So Black Birkin 35 with black PVC hardware ; and a Rose Azalea Swift Leather Quelle Idole with palladium hardware. Also featured are runway pieces by Chanel including a limited-edition Leather Record Clutch from Spring/Summer 2004 and a dark pink patent Leather Milk Carton Bag. These pieces have a pre-sale estimate of $40,000-60,000, $12,000-15,000, $3,000-4,000, and $2,000-3,000, respectively.

Although these products were created with different intentions to speak to different audiences, their value accurately reflects what today’s collector understands as luxury. This is perhaps most easily understood by the pre-sale price estimates, which sees one of the world’s most collectable Hermès bags estimated for nearly the same range as Supreme x Louis Vuitton’s coveted 90 Trunk.

Christie’s worked closely with Ibrahim Itani, founder of Canadian streetwear superstore Plus, and expert Byron Hawes to curate this massive offering. To learn more about this historic occasion, Highsnobiety visited Christie’s New York’s warehouse and exhibition. In the video above, Byron Hawes and Caitlin Donovan, Head of Sale for Handbags & Accessories, provide more insight in to the curation process and give Highsnobiety readers an exclusive look inside Handbags X HYPE.

The auction is open for bidding online until December 10 with the exhibition in New York running concurrently for those that want to see the products in person. The exhibition’s location and hours are as follows:

Preview Our First Ever Consignment Auction in Collaboration With Paddle8, Launching June 14
DesignsponsoredJune 7, 2019

Jeff Koons’ ‘Rabbit’ to Be Auctioned for More Than $50 Million in NYC
DesignsponsoredMay 3, 2019
Follow
Highsnobiety Style
What To Read Next
Load More
Search Results
Load More