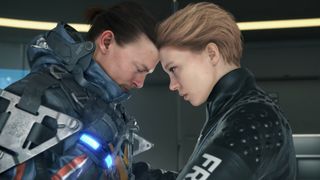 With E3 only a couple weeks away, Sony and Hideo Kojima have dropped a surprise trailer for the highly anticipated PlayStation exclusive, Death Stranding.

In a strange new nine minute trailer, we get a closer look at the impressive cast, breathtaking graphics, amazing sound design, and finally a first glimpse of actual gameplay. Set in several different earthly elements, we see our protagonist, Sam, blend action and stealth as he fights off unworldly enemies.

The story itself is still just as confusing as the original reveal trailer at Sony’s E3 2016 press conference, but thankfully we won’t be waiting too much longer as the game is set to release on November 8, 2019. As a result, The Last of Us 2 has reportedly been pushed back to early 2020, according to Kotaku.

The game is also now up for pre-order. There are four different versions of the game that can be purchased: the Standard Edition, Special Edition, Digital Deluxe Edition, and Collector’s Edition, as revealed on the PlayStation Blog.

Check out the brand new trailer for Death Stranding above. Will you be copping?