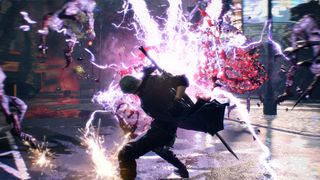 After announcing the title along with a preview during E3 in June, Capcom has just dropped new gameplay footage of Devil May Cry 5 in addition to confirming its release date at Gamescon 2018, slated for March 8, 2019.

This latest trailer places an emphasis on one of the game’s main protagonists, Nero, and his special “Devil Breakers,” which are mechanical arms that grant him with special demon slaying powers. As seen in the gameplay above, some of the arms’ features allows Nero to snatch his enemies with a grappling hook, in addition to surfing through the air with his rocket-powered limb.

Furthermore, the main protagonist, Dante, makes a brief appearance and showcases his new weapon, a motorcycle that can be split in half and used as a pair of chainsaws.

"This party is getting crazy!" Dante is confirmed as one of three playable characters in #DMC5! What do you think of his wild new weapon? pic.twitter.com/vZgEqNLudj

For more details, game features and additional trailers, click the link in the box below.

In other video game news, Ninja explains why he won’t play ‘Fortnite’ with female gamers.