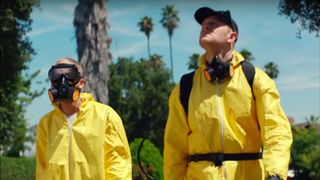 Dominic Fike has dropped a video for his July single “Phone Numbers,” enlisting help from a few friends in Halsey and the track’s producer Kenny Beats.

The visual features Fike and Kenny Beats teaming up to rob Halsey’s home before it all goes wrong. It’s possible to read the video as a Breaking Bad homage, as the two meat up in a fast food restaurant before donning exterminator suits for the robbery in question. After Kenny Beats gets pinched for the robbery, Fike escapes and tries his hand at a variety of jobs that are more or less a mere reason for him to ham it up. Of course, the law eventually catches up to him.

Look for Fike to begin a European tour later this month.