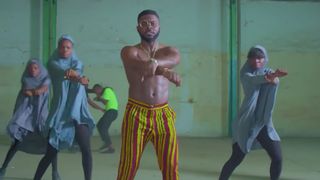 Following a wave of analysis, parodies, mashups, Childish Gambino’s “This Is America” has now been followed up by Nigerian rapper Falz’s own Diddy-approved take, “This is Nigeria.”

As seen above, the Lagos-born rapper and actor emulates the warehouse set-up used by Gambino and director Hiro Murai, only, unlike Gambino, he’s wearing print pants and an iced-out chain. All around him, chaotic scenes of violence, illicit dealings, worship, and dancing take place, satirizing the Falz’s homeland: instead of a gun, there are machetes; replacing the dancing schoolchildren are four young women in chadors, an apparent reference to the Chibok schoolgirls kidnapped by Islamist group Boko Haram in 2014.

The video is directed by Prodigeezy and the song’s lyrics blend English with Yoruba, touching upon corruption, religion, and economic strife: “This is Nigeria / Praise and worship, we singing now / Pastor put hand on the breast of his member, he’s pulling the demon out / This is Nigeria / No electricity daily, o / Your people are still working multiple jobs and they talk say we lazy, o.”

For the full video, press play in the gallery above.

For more on “This is America,” check out this Carly Rae Jepson mashup here.

In other music news, Ameer Vann has been kicked out of BROCKHAMPTON. More on that here.

Nigeria, U.S.A. & South Korea Just Came Through With Some of the Year’s Best Kits
StylesponsoredFebruary 5, 2020

All Eyes on Nigeria as Menswear Comes of Age in Lagos
StylesponsoredSeptember 3, 2019