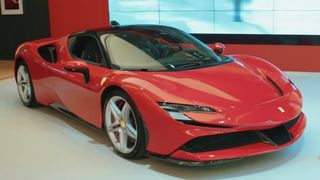 For the first time, Ferrari‘s SF90 Stradale a.k.a. the company’s most powerful road car, is currently on display to the public in London and thanks to British motor show Top Gear, we now have our closest look yet. Watch the video above.

Stopping by the London showroom to take a peek at the SF90, Top Gear‘s deputy editor Jack Rix describes it as a sleek hypercar with incredible presence. He adds that it is “the latest, greatest, mid-engine V-8 Ferrari super-car. But this one is a hybrid; The first-ever series production hybrid V-8 mid-engine super-car from Ferrari.”

According to Rix, it’s even more dramatic in person compared to the official images. Nevertheless, the numbers speak for themselves, with a 4.0-liter turbocharged V8 capable of producing 769 horsepower on its own, and 590 pound-feet of torque. The engine alone makes it the most powerful V8-powered car ever.

It’s estimated that the SF90 Stradale will retail for around $499,000. Specific pricing details to follow.

Your Closest Look Yet at Virgil Abloh’s New “COMING OF AGE” Exhibition
DesignsponsoredJune 17, 2019

New Palace Teasers Deliver Our Closest Look Yet at the SS20 Collection
StylesponsoredFebruary 3, 2020