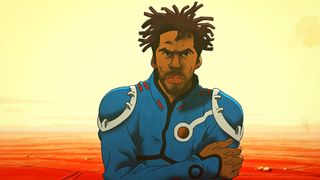 Just last week, Flying Lotus dropped the Anderson .Paak-assisted single “More” from his forthcoming album Flamagra. Now, the musician has released the official music video, animated by Cowboy Bebop director Shinichiro Watanabe. In the animated sci-fi visual, FlyLo’s a space adventurer who eventually morphs into an organ tree that ends up in flames, while .Paak is a robot DJ. Watch it above.

Watanabe and Flying Lotus previously collaborated together on the animé short film Blade Runner Black Out 2022, released in 2017. The director revealed in a statement that he and Flying Lotus are working on an upcoming series called Carole & Tuesday.