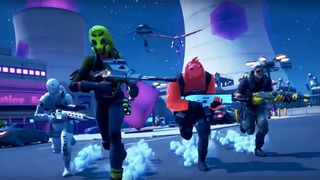 Fortnite fans went wild this weekend after the entire map was sucked into a black hole. Now it looks like Epic Games was probably just teasing the arrival of a new season after all, if a new leaked trailer titled Fortnite Chapter 2 Battle Pass, is anything to go by. Watch above.

The new trailer shows a whole new map which seems to be set around water, and new features such as swimming, fishing, and boats. It also looks like the level cap will go from 100 to 127, and players will able to increase their ranks by fighting, looting, and collecting materials. There will be plenty of rewards too, as the trailer announces more than 100 medals.

At this time, there’s no official announcement regarding the new game’s release date. As real fans may remember, this isn’t the first time Epic Games teases a new season by wiping the map away. Season seven of Fortnite ended in an earthquake, which then became a volcano eruption that introduced season eight.