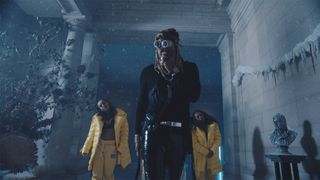 Fresh off the back of “NASA,” his collaboration with French Montana, Future has dropped a new single titled “Crushed Up.” The song will appear on the artist’s forthcoming album, which has yet to be titled but is due out January 18 via Epic Records/Freebandz Entertainment. The project will serve as Future’s first solo release since last year’s BEASTMODE 2 mixtape.

Future has also released an icy video to accompany “Crushed Up.” Check it out above.

The rapper had a mixed 2018, clearing his Instagram of all posts and canceling his joint tour with Nicki Minaj last summer. But now, with the release of “Crushed Up,” it looks like Future has big things planned for 2019.

Stream the song below and let us know what you think in the comments.

In other news, Barack Obama debuted on the Billboard Hot R&B chart. Find out more here.

Future Announces New Album ‘Save Me’ Is Dropping This Week
MusicsponsoredJune 5, 2019