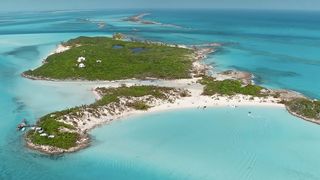 The private island heavily featured in the promotional material for the ill-fated Fyre Festival in the Bahamas is currently available to purchase. The 35 acre property with the seven beaches of Saddleback Cay is now on the market for a mere $11.8 million by Bahamas realtor HG Christie.

The Caribbean island boasts 90 feet of elevation and features a 360-degree view from one of the highest points in the Exumas. For under $12 million, you can acquire the main house and additional ancillary cottages as well.

Saddleback Cay is not to be confused with Great Exuma where the infamous festival actually took place. Forbes also reports that the property is not affiliated with Pablo Escobar’s smuggling route in case that’s of concern to any interested buyers or investors.

If Fyre Festival is a distant memory by now, you can get the full-rundown on exactly how disastrous things got in our recap  Inside 2017’s Most Infamous Festival Nightmare.