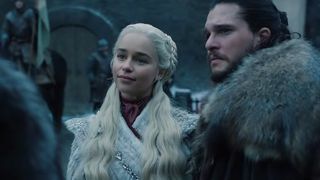 With only four months to go until we’re catapulted back to Westeros for the final ever season of Game of Thrones, HBO has dropped a new teaser to get fans fully aboard the hype train.

The footage is brief but depicts what is probably the most amicable castle handover in Thrones history, when Sansa hands her family home to Daenerys Targaryen as the Mother of Dragons arrives at (what is presumably) Winterfell.

The rest of the trailer is dedicated to teasing snippets from the rest of HBO’s impressive 2019 slate, delivering glimpses of new seasons of The Deuce, Big Little Lies, True Detective, and more. Watch above.

Are you excited for the Game of Thrones finale? Let us know in the comments.

In other news, Netflix shares an awkward first trailer for ‘Friends From College’ season two.