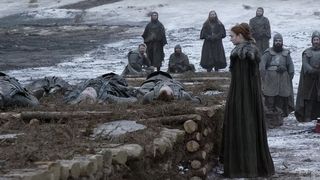 HBO has released a 19-minute behind-the-scenes special to accompany the latest episode of Game of Thrones‘ final season, “The Last of the Starks.” The video includes interviews with cast members, including Lena Headey (Cersei Lannister), Kit Harington (Jon Snow), and Peter Dinklage (Tyrion Lannister), as well as invaluable insights from showrunners D.B. Weiss and David Benioff.

The video first takes us to the Winterfell feast scene, a narratively important plot moment and the site of that Starbucks cup’s now famous cameo. Sophie Turner (Sansa Stark) describes the scene as “Like coming back to school on the first few days.”

Next, the video shifts to the opening funeral scene. The huge fires required medical and fire support, and we learned that the huge burning pyres outside Winterfell were significantly difficult to put out. Elsewhere, we get insights into the “giant, dragon-killing Scorpion,” which took down Rhaegal, the second of Daenerys Targaryen’s three dragons to die, and how the cast and crew put together a scene with the massive crossbow-like weapon.

As the series draws to an end, cast members continue to say their final farewells, both in character and professionally. Watch the video above to see how they handled their most recent goodbyes.

Go Behind the Scenes of Last Night’s Devastating ‘Game of Thrones’ Episode
MoviessponsoredMay 13, 2019

‘Game of Thrones’ Shares 40 Minute Behind the Scenes “Battle for Winterfell” Video
MoviessponsoredApril 29, 2019

All the Best ‘GoT’ Memes & Reactions From the “The Last of the Starks”
MoviessponsoredMay 6, 2019

Tension Is Rising in the ‘Game of Thrones’ Trailer for “The Last War”
MoviessponsoredMay 6, 2019
What To Read Next
Load More
Search Results
Load More