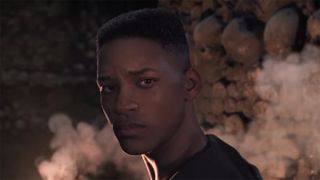 Check out our first trailer for Gemini Man!

As Smith alludes to in his Instagram caption, Gemini Man pits the 50-year-old entertainer against himself, as he portrays Henry Brogan, an aging assassin at odds with an adversary that knows his every move before he makes it. Brogan soon finds out that he is battling a clone that is a younger version of himself. Essentially, the sci-fi film stars a 50-year-old Will Smith and a 23-year-old Will Smith.

It’s been reported that Gemini Man has been in development since 1997 when Walt Disney Studios purchased the concept. Working with Ang Lee, Jerry Bruckheimer, David Ellison, Dana Goldberg, and Don Granger have been tapped to produce the picture, which also features Mary Elizabeth Winstead, Clive Owen, and Benedict Wong.

Gemini Man is due in theaters October 11.

Who will save you from yourself? Check out the official poster for @GeminiManMovie in theatres 10.11.19. pic.twitter.com/fvK0XFPzmW

Tom Holland Turns Will Smith Into a Pigeon in New ‘Spies in Disguise’ Trailer
MoviessponsoredJuly 2, 2019