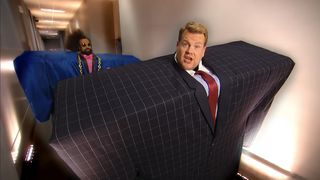 Last week Kanye West and Lil Pump released their wild new video for “I Love It,” which went on to inspire a viral dance challenge. Following a slew of video uploads and hilarious memes, James Corden has unleashed his own version of the song/visual.

This is the Late Late Show…. pic.twitter.com/f4swA7TXh4

In the comical clip, we see Corden and Reggie Watts in boxy outfits and oversized shoes, dancing down a hallway. Press play above to watch the Late Late Show parody, then let us know if you prefer this version over Kanye and Lil Pump’s.

For more, get a look at Spike Jonze’s early sketches for “I Love It.”

In related news, Kanye West has returned to Instagram with mysterious new photos.