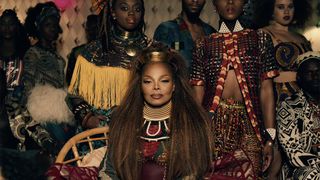 Janet Jackson has stepped back in the spotlight once again following a two-year hiatus, and after headlining the Panorama New York City music festival in July, the world-renowned pop superstar has now released her newest single, “Made For Now,” featuring the “King of Reggaetón,” Daddy Yankee.

This saucy new collab is the the latest from Janet Jackson since her 2015 album Unbreakable, as the featured music video above directed by Dave Meyers is fun-filled as well, with the visual set in different neighborhoods of Brooklyn, New York on a hot summer day.

The vibrant and rhythmic track complements vocals from Daddy Yankee, as the video follows Janet Jackson throughout the city, along with a group of multi-cultural dancers, with Janet and company flexing their funky dance moves with other party-goers.

Enjoy the video above, then after, Lil Miquela struggles with fame on Baauer’s new track “Hate Me.”

The New Collection From Human Made Is Now Available
StylesponsoredApril 14, 2020