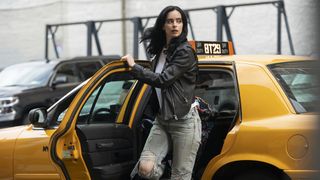 Although the show has been canceled, Netflix treads on, this week sharing the release date for the third and final season of Jessica Jones. In addition to the premiere date, the streaming service also gives us a first look at the new season.

The short clip suggests that Jessica Jones is a fraud and a cheater, per the voiceover in the background, as the camera zooms in on Jones’ Alias Investigations office before the titular character opens the door. Unfortunately, however, this is all we get in the first teaser for season three.

Sometimes not even "heroes" can save themselves.
Marvel's Jessica Jones Season 3 begins June 14th. pic.twitter.com/lHA676a9m1

Netflix Drops ‘On My Block’ Season 3 & Everyone Is Losing It
MoviessponsoredMarch 11, 2020