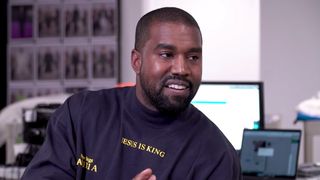 From his viral interview with Zane Lowe, to Jesus is King album FINALLY dropping, to new store merch, Kanye West has been all over the news this week. To keep the ball rolling, West sat down with Big Boy for an hour long interview.

Throughout the talk, the two dive into similar topics from the Beats 1 interview including getting canceled, Instagram, fish sticks, and more! He even claims that he’ll never perform his old music again.

.@kanyewest says #JesusIsKing is a rap album & that Playboy magazine he found when he was 5 years old had an effect on his music. Full interview @ 7:20am @BBNcrew @BigBoy #JesusIsKing pic.twitter.com/K3Von1QfQQ

He continues, “They made movies about Steve Jobs so y’all could understand who I am,” he said. “Now, when you go to the Apple store, I don’t be seeing no iPod 4 . . . Take you to eBay and get you the old Kanye and get you a vintage iPod 4 while you’re at it, a Sega 8-bit.”

However, regarding “Jesus Walks,” he’ll still play the beat but will update the lyrics.

This is hilarious! When @BigBoy asked Kanye if he'll perform his old music again:

"We miss the old iPod 4 though!" – Big pic.twitter.com/iC5ssgrXZG

Watch the entire Big Boy TV interview in the video above.