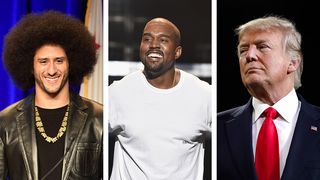 After getting booed off SNL following his pro-Trump rant, Kanye West doesn’t shy away from stirring up the media as he just revealed to TMZ that he has contacted Colin Kaepernick about meeting with the POTUS at the White House.

In the clip above, TMZ founder Harvey Levin asked West, “Do you give up on someone growing when they are unrelenting at a point where you say ‘they are who they are’?”

Ye then continues by revealing his plans to establish peace and unity to the White House through a visit by Colin Kaepernick, whose six-year NFL career may have ended after no team elected to sign him in the wake of his protests against racial injustice and police brutality.

“I’ve been calling Colin this morning, reaching him so we could remove that ‘son’s of b*tches’ statement and we can be on the same page.”

Enjoy the video above, and for more, Kanye West postpones the release date for ‘YANDHI’ until Black Friday.