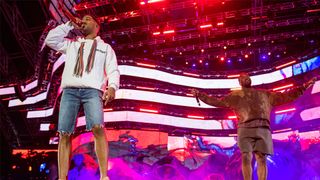 This weekend, Kanye West joined Kid Cudi on stage at Coachella for Cudder’s closing set in the Sahara tent.

West opened up Cudi’s performance, as the duo moved through tracks from 2016’s The Life of Pablo and 2018’s Ye, with “Ghost Town” (yes, they brought out 070 Shake too) and “Father Stretch My Hands, Pt. 1” early on being the arguable highlights. Both clad in YEEZY sneakers, the longstanding collaborators were not much of a surprise to see on stage together, and although West’s appearance wasn’t billed, it was a bit predictable given their friendship, and the fact that West will be hosting his Coachella Sunday Service the morning after. Maybe we’ll see Cudi there?

Check out the live stream video in the top gallery above for a full look, while Cudi also brought out Ty Dolla Sign later on in the performance.