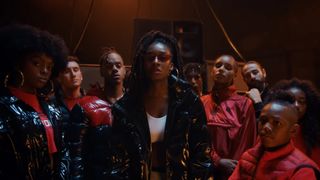 Fresh off going “Boss” mode on her latest single, Little Simz just dropped the official video for her other new track “Offence,” which premiered last month at Zane Lowe’s World Record on Beats 1.

The English rapper/singer made her return with the song, nearly two years since the release of her Stillness in Wonderland album.

Directed by Charlie Di Placido and J Lloyd, the visual depicts Lil Simz in a low-lit warehouse backed by a crew of breakdancers battling it out while jiving to the song’s funky drum pattern and bassline. “I enjoyed trying something new as this is the first time I’d worked with dancers for a video,” Simz said of the video in a statement. “They brought so much life and energy to it.”

Lil Simz will also be performing live in the U.S. this month, and you can view the dates and locations below.

For more on Lil Simz, check out the official lyric video for “Boss” below.

Work From Home
Simulate a Fulfilling Life While Stuck at Home With These 10 Video Games
LifestylesponsoredMarch 18, 2020
Follow
Highsnobiety Music
What To Read Next
Load More
Search Results
Load More