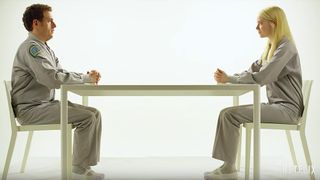 The teaser trailer for Netflix’s upcoming limited series Maniac dropped over the weekend and it looks set to be a disorienting ride. Watch above.

The show stars Emma Stone and Jonah Hill but don’t expect any Superbad feels here. Directed by Cary Fukunaga, who helmed the first season of True Detective, Beasts of No Nation, and co-penned the It revival, expect plenty of weird and mysterious forces at play.

The 10-part series arrives on September 21. Netflix explains that the narrative revolves around Annie Landsberg (Stone) and Owen Milgrim (Hill), two strangers who meet during a clinical drug trial. The pills they take — invented by Dr. James K. Mantleray (Justin Theroux) — are said to “repair the mind” with zero side-effects or complications. However, in Netflix’s own words, “Things do not go as planned.”

Are you hyped for Maniac? Let us know your thoughts in the comments.

Next, ‘Stranger Things’ season three has been delayed until summer 2019.

The 20 Scary Movies You Should See At Least Once
In-DepthsponsoredMay 21, 2019

Jonah Hill Reportedly Drops Out of Villain Role in ‘The Batman’
MoviessponsoredOctober 17, 2019
What To Read Next
Load More
Search Results
Load More