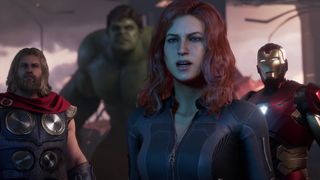 Crystal Dynamics has finally peeled back the curtain for the much anticipated E3 gameplay demo of Marvel’s Avengers. First revealed to a number of press behind-closed-doors during the gaming expo in June is now online available to watch in all of its 4K goodness.

The 18-minute demo, labeled as the “A-Day Prologue,” find earth’s mightiest hero’s battling it out on the Golden Gate bridge against Task Master and his minions. The lengthy video shows off unique gameplay for Thor, Iron Man, Hulk, Captain America, and Black Widow. Sorry, Hawkeye fans.

The level seems to serve as a tutorial introducing us to fight mechanics, which in some cases resembles those of the popular MCU characters. However, each superhero sounds nothing like the ones on the big screen, including Cap, who looks more like a S.W.A.T. nut rather than America’s greatest ass.

I wouldn’t worry too much about vanity though. Crystal Dynamics claims that the game will have many RPG elements including rare armor sets to obtain for each character, alongside the addition of more Marvel characters being added to the game in future updates. Yes, there will be microtransactions.

Check out the gameplay trailer for Marvel’s Avengers in the video above.