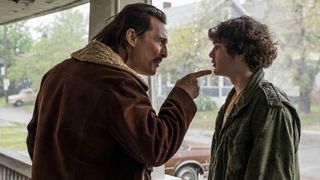 Matthew McConaughey‘s new movie White Boy Rick lands in theaters this week, and ahead of the premiere, the veteran actor stopped by The Tonight Show Starring Jimmy Fallon to discuss the Hollywood picture.

McConaughey begins by detailing the plot of the film, which is based on the true story of Rick Wershe (played by McConaughey) and his son Rick Wershe Jr. (played by Richie Merritt). After beginning to sell drugs as an early teenager, Rick Jr. was approached by the FBI, leading him to become the youngest-ever FBI informant at the age of 14.

In speaking on the casting of Richie Merritt to portay Rick Wershe Jr., McConaughey revealed that after a tireless search, Merritt was found in a Baltimore school principal’s office. He then went on to discuss how Merritt had no idea who he was, while detailing their first meeting at a bowling alley.

Press play above to see Matthew McConaughey talk about his new movie.