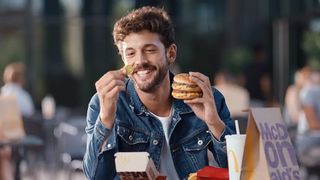 In celebration of the Big Mac’s 5oth birthday, McDonald‘s has launched a new kind of currency — the MacCoin — in honor of the legendary burger.

The currency was inspired by The Economist, which uses the Big Mac as a lighthearted way to compare global exchange rates. It is based on the theory of purchasing-power parity (PPP), the notion that global exchange rates adjust to make the price of tradable goods the same in every country.

As the video up top explains, in this new “food-backed currency,” each coin you lay your hands on is worth one Big Mac.

We're celebrating 50 years of Big Mac by creating a global currency—MacCoin—each one worth a free Big Mac around the ?, with 5 collectible designs for 5 legendary decades. Starting August 2, collect your own MacCoins when you buy a Big Mac while supplies last. #BigMac50 pic.twitter.com/xn8Z9GNLSp

The MacCoin arrives in five collectible variations, one for each decade the double-patty treat has been on this planet. The coins feature era-appropriate illustrations like ’70s flower power vibes, Saved by the Bell-esque ’90s graphics, early ’00s technology, and recent references to social media and emoji.

The currency launches on August 2.

Is the Big Mac your favorite burger? Share your preference in the comments.