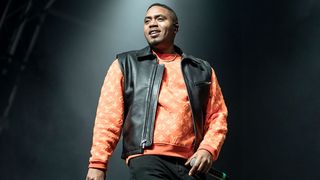 Nas has been gearing up to release his compilation album The Lost Tapes 2, the spiritual sequel to 2002’s The Lost Tapes. And now we finally have our first sonic preview. “Jarreau Of Rap (Skatt Attack)” is a head-spinning, abstract homage to jazz legend Al Jarreau, finding Nas masterfully flow along an abstract jazzy beat. Listen to the song above.

Nas explores new musical territory, going in over a sample of the late Al Jarreau’s “Blue Rondo à la Turk” on the Xharlie Black-produced track. Over vibrant brass sounds and frenetic keys, the Queens legend affirms that he is “married to harmony.” It’s an experimental sound for the rapper, but in a way goes back to his roots, recalling his father, jazz musician Olu Dara.

Nas’ unashamed musicality on this previously-unreleased track only has us more excited for the full album. The Lost Tapes 2, a follow-up to 2002’s The Lost Tapes, drops July 19.