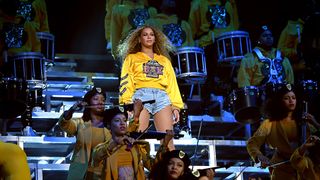 Beyoncé‘s historic 2018 Coachella set will be the focus of Netflix’s forthcoming music documentary, Homecoming. The film is slated to premiere on April 17 on the streaming service.

Two historically black colleges, Washington D.C.’s Howard University and Houston’s Texas Southern University, will get the first look at the film at 7 p.m. on Tuesday, April 16. Access to the advanced screenings are on a first-come-first-served basis.

HBCU @TexasSouthern will be having a special advance screening of Beyoncé's new documentary Homecoming for their students.#BeyoncéHomecoming premiers Apr. 17th on @netflix. pic.twitter.com/aoinwOqJWY

Netflix teased the film with a cryptic posts on Twitter and Instagram over the weekend. While Beyoncé and Coachella are not explicitly mentioned, the color scheme and font clearly reference the yellow costumes worn by her backup dancers during her 2018 headlining set, as well as the launch of her Homecoming Scholars Awards Program.