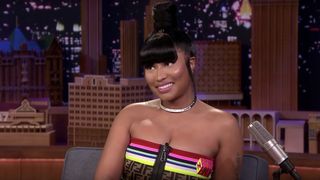 Nicki Minaj stopped by The Tonight Show Starring Jimmy Fallon to update fans on her next album. She told Fallon that although the project doesn’t have a title as yet, it is definitely in the works. She told him “You’re the first to find out… of course there’s a new album.”

Minaj had drama-riddled rollout for her most recent studio album Queen. However, her latest single, “Megatron” went straight to number one on iTunes, which the rapper explained, still excited her. She said, “No matter how many songs you put out, it always feels good to know that people still care enough to chuck for it and still support you.”

In her chat with the late-night host, Minaj remembered the first time she performed for a crowd who knew the lyrics to her song, running into Fallon at the Met Gala 2019 and posing like a queen. Watch the clip above and stay tuned for a name and release date as more details emerge.