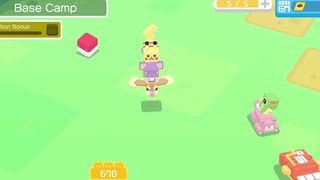 If you’re a Pokémon fan with a Nintendo Switch, your day just got a whole lot better: Nintendo just released Pokémon Quest, and not only is it available to download via Nintendo’s eShop, it’s totally free. What’s more, there are three more Pokémon games in the pipeline, which are set to drop later this year.

Pokémon Quest isn’t your standard Poké fare, either. Described as a “rambunctious action RPG,” in the game you play as a collection of cube-shaped critters (rather than as a trainer), exploring and battling on Tumblecube Island. Watch the trailer above.

Two other Pokémon games will drop on November 16, Pokémon: Let’s Go, Pikachu! and Pokémon: Let’s Go, Eevee!. These titles will be more in line with traditional Poké RPGs and will tie in with mobile hit Pokémon GO. The third game is slated for “late 2019.”

Pokémon Quest will also hit iOS and Android in “late June.” Will you be downloading the game? Let us know in the comments.

Now watch Ant-Man and the Wasp plan to destroy Ghost in a new TV teaser.