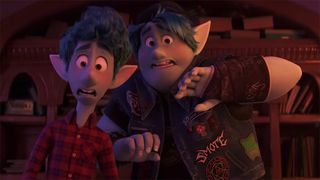 After sharing a first look back in May, Pixar releases the full-length trailer for its new movie, Onward. Tom Holland and Chris Pratt voice the lead characters in the film, as Julia Louis-Dreyfus and Octavia Spencer also feature.

Onward follows two teenage brothers, Ian and Barley Lightfoot (Holland and Pratt), as they embark on an extraordinary journey to find out if there is any magic left in the world. More specifically, after their mother, Laurel Lightfoot (Louis-Dreyfus), presents Ian and Barley with a gift their deceased father wanted them to have, they in turn attempt to use it to bring him back to life.

Directed by Dan Scanlon and produced by Kori Rae, the team behind Monsters University, Pixar’s Onward comes to theaters March 6, 2020.

UNION’s Chris Gibbs Wants to Put the ‘Culture’ Back In Streetwear
StylesponsoredJune 4, 2020
What To Read Next
Load More
Search Results
Load More