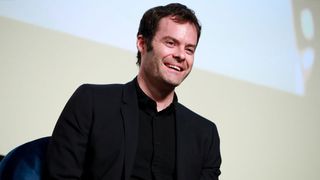 That terrifying eyeball maneuver Pennywise performs in the IT series isn’t a CGI after effect. It turns out Bill Skarsgård can do it on cue. His costar, Bill Hader explained how he learned this piece of trivia on Conan earlier this year. And– with the release of It Chapter Two– receipts from the exchange have found their way back into the public purview and the internet is finding the exchange extremely relatable.

As Hader recounts in the video above, the images show him asking Skarsgård if the eye contortion is “a digital thing?” The Pennywise actor apparently responded “Oh, you mean this?’ much to Hader’s horror. In the interviewing months since the story aired the interaction has been given the meme treatment, proving that Bill Hader is all of us.

Scroll through some of the funniest and most real incarnations of the meme below.

Bill Skarsgård scaring Bill Hader behind the scenes of IT chapter 2 might be the funniest set of photos I’ve ever seen pic.twitter.com/oH5qDbsGDY

Just imagine walking around a set and seeing this shit pic.twitter.com/B8df3kOT1T

Because socializing is hard

Pennywise is any social situation and Bill Hader is me pic.twitter.com/8tB5RQ3bQG

Me: pennywise
Bill Hader: all the boys I genuinely like https://t.co/56CxBKruaD

Pennywise is me flirting pic.twitter.com/8rqyRUDR1r

And so is keeping your cool

me reading texts I wrote late at night the following morning pic.twitter.com/f3qvFqFzRW

#ITChapterTwo comes out tomorrow. Prepare for me to not shut up about Bill Hader pic.twitter.com/CPxazE7waE

Billy Porter’s Hat & Other Mood-Worthy Memes From the 2020 Grammys
MusicsponsoredJanuary 27, 2020

These Silk Shirts Will Add Some Shine to Your Summer Wardrobe
SelectssponsoredApril 8, 2020

Pennywise Is Out for Revenge in Final ‘IT Chapter Two’ Trailer
MoviessponsoredJuly 18, 2019

‘It Chapter Two’ Will Have an Insanely Long Runtime
MoviessponsoredJuly 29, 2019

These Affordable Performance Shoes Will Have You Up & Running in No Time
SelectssponsoredMay 27, 2020
What To Read Next
Load More
Search Results
Load More