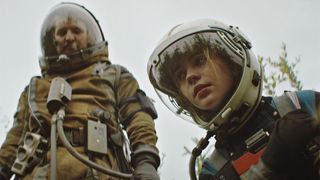 Following a well-received premiere at SXSW 2018, Zeek Earl and Christopher Caldwell’s Prospect is gearing up for a theatrical release. The much-anticipated sci-fi thriller is based on a short by Earl and Caldwell, who also direct the picture.

Prospect stars Pedro Pascal (Game of Thrones, Narcos), Sophie Thatcher (The Exorcist), and Jay Duplass (Transparent), centering around a girl and her father who are traveling to a remote moon in search of fortune. Along the way, they quickly find out they are in over their heads as they come in contact with hostile natives.

See below for the official Prospect movie poster.

You can look forward to the film landing in theaters November 2.