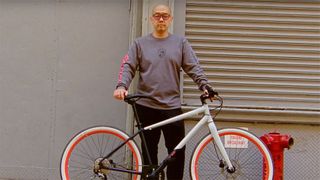 Raleigh Bicycles and jeffstaple, founder of longstanding streetwear line Staple Pigeon, have joined forces to create the bike we’re all going to want to ride this summer: the Raleigh Redux 2 Staple Edition.

The bike is a fresh spin on Raleigh’s classic Redux 2 city bike, coming in black and white and elevated by accents in Staple Pigeon’s signature pink colorway. It has an aluminum frame with rack and fender mounts, a simple 1×9 speed drivetrain, and powerful hydraulic brakes — vital for riding around New York City, as Staple, Christina Paik, and Mick Batyske do in the video above.

But how the bike interacts with the city extends further than brake power. Texture has been added to the frame finish for added grip and there are playful “pigeon poop” splatters on the seat.

The Raleigh Redux 2 Staple Edition which will retail for $780, will drop alongside an exclusive capsule collection on July 11 via both brands’ online stores and select retailers.

Jeff Staple Is Giving His Latest Nike Sneaker Away for Free & Here’s How to Get It
SneakerssponsoredNovember 19, 2019