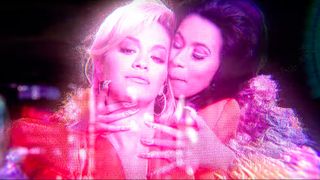 Rita Ora‘s new single, “Girls,” was met with controversy, but that isn’t stopping the British singer/actress from unleasing the song’s official music video.

Ahhh it's finally out! #GIRLSvideo!!! https://t.co/i2moE0MXjN Let me know what you think ❤️ Thanks for everything beautiful ladies @iamcardib @beberexha @charli_xcx pic.twitter.com/hDDZmXfpZA

As to be expected, the Helmi-directed aesthetic features a slew of women, including Rita alongside song collaborators Charli XCX, Bebe Rexha, and a holographic Cardi B, who just so happens to share a kiss with Ora. Watch the clip now above, and be sure to leave us your thoughts in the comment section.

Following backlash from “Girls,” Rita released a statement saying, “‘Girls’ was written to represent my truth, and is an accurate account of a very real and honest experience in my life.”

Cardi B then responded by adding, “We never try to cause harm or had bad intentions with the song. I personally myself had experiences with other woman, shiieeett with a lot of woman! I though[t] the song was a good song, and I remember my experience.”

What’s your take on the track?

Next, watch The Internet’s new video for ‘Hive Mind’ track, “Come Over.”

Cardi B Has Shot a Video for Bernie Sanders’ Presidential Campaign
MusicsponsoredJuly 30, 2019

Cardi B Explains Why She Used to Drug and Rob Men
MusicsponsoredMarch 27, 2019