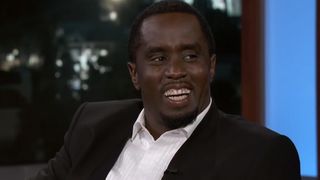 Sean “Diddy” Combs is the latest guest to sit in the Jimmy Kimmel Live! guest seat, talking shop on a wide range of topics including politics and his childhood experience of living with an Amish family.

While discussing his “mission” to become an example for up and coming artists, Kimmel interjected, asking Diddy if he was jealous of Kanye West’s relationship with President Donald Trump. Diddy laughed and shrugged the question off, saying he was not. When later asked if he would run for President, Diddy was even more unequivocal, stating with certainty that he would not be good at the role.

Elsewhere in the interview, the pair talked about Diddy’s fascination for giant snakes and the time he lived in an Amish paradise. Watch the footage below.

Elsewhere, Kanye West is set to be on the cover of ‘Harper’s Bazaar’ “Icons” Issue.