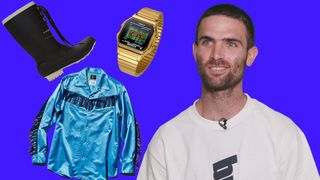 Following Highsnobiety Issue 18 cover star, Danny Brown, designer and vintage enthusiast Sean Wotherspoon is the our latest guest on Cop or Drop. The series highlights special guests as they reveal whether they would buy or pass on purchasing some of the hottest items of the moment.

On the latest installment, Wotherspoon shares his love for nostalgic items including Nestle push-up pops, a $6K CD collection of Master P’s entire discography, as well as a Clueless lobby card signed by Alicia Silverstone and Paul Rudd. He also reveals that “high-end” fashion is a mysterious black hole for him, which why he’d rather drop the Needles x Velvet fringe cowboy shirt and the Martine Rose chain detail loafer. He would make an exception for the Sies Marjan Alex Degrade cropped pant, however.

To see which trending items Sean Wotherspoon would actually spend money on, press play above.