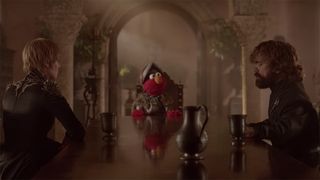 With season eight of Game of Thrones underway, predictions and fan theories surrounding the series’ finale are circulating now more than ever. And while we still have a few episodes left before we find out what ultimately happens in Westeros, Sesame Street has partnered with HBO to give us an alternate ending that is not likely to occur.

In celebration of Sesame Street’s 50th anniversary, the company has launched a new campaign titled “Respect Brings Us Together,” encouraging individuals to respect one another no matter their differences. To support the initiative, Elmo has paid a visit to Game of Thrones siblings Cersei and Tyrion to convince them to set aside their hatred and instead join forces.

While this likely isn’t the ending that will take place in Game of Thrones, it’s a jovial scenario nonetheless. Press play above to watch the light-hearted sketch from Sesame Street and HBO.

Respect brings us together, and if anyone can convince @GameOfThrones's Cersei and Tyrion to get along, a familiar furry red friend might just be the one. #RespectIsComing #RespectBringsUsTogether pic.twitter.com/4i94lU6YIh

The Ending of ‘Game of Thrones’ Is Apparently Hidden in This Spotify Playlist
MusicsponsoredApril 11, 2019

The 5 Wildest Fan Theories About How ‘Game of Thrones’ Will End
TVsponsoredMay 17, 2019

These ‘Game of Thrones’ Fan Theories Say the Divisive Ending Was Teased All Along
MoviessponsoredMay 21, 2019
What To Read Next
Load More
Search Results
Load More