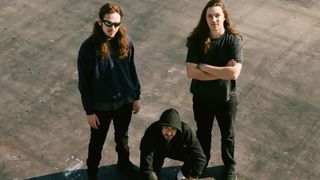 Show Me the Body is officially ready to roll out the follow-up to 2017’s Corpus I mixtape. The New York-based hardcore trio recently made the album announcement official by dropping a brand-new single called “Camp Orchestra” along with an accompanying visual that they co-directed with rubberband. Apparently, the track was inspired by Poland’s Auschwitz-Birkenau Memorial and Museum. In a press release, Show Me the Body explained their intent behind the forthcoming record in a short statement.

“In the midst of losing friends, we strived to create a stronger community, dedicated to fight, survive, and thrive in their memory and spirit,” they wrote. “A lot of people have said to us this is a perfect time to make a Punk record. We are disgusted by this prompt. This album and our music does not belong to a political party. No authority, political movement, or side may claim the function of our music in this society. This album is personal. It is about and for the disenfranchised youth of this city, of this country, and of this earth. It is for our community and anyone who may find shelter within it.”

Dog Whistle is due out on March 29 via Loma Vista Recordings. Watch the footage above and while we have your attention, scroll down for the list of headlining tour dates to catch the band live:

Here’s a Rare Chance to Shop BODE With Up to 50% Off
SelectssponsoredFebruary 27, 2020

Here’s Where to Shop the Woolmark Prize 2020 Nominees
SelectssponsoredNovember 11, 2019

How the Yankee Cap Became a Timeless Style Staple
AccessoriessponsoredDecember 11, 2019

How to Rock the “SLP” Aesthetic in 2019
SelectssponsoredApril 4, 2019
Follow
Highsnobiety Music
What To Read Next
Load More
Search Results
Load More