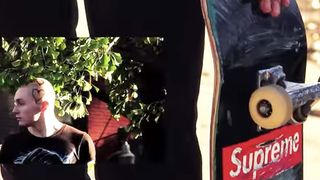 If you feel William Strobeck‘s feature-length Supreme skate film BLESSED deserves to be seen on the big screen, you’re in luck. Supreme is celebrating the film with a limited cinematic release in New York City. Check out the trailer above.

The film is Strobeck’s second for Supreme (after cherry in 2014) and delivers a raw, no-frills dive into skate culture. The 82 minutes film originally premiered at an invite-only showing exclusive to Supreme affiliates.

BLESSED will be showing at New York’s Cinema Village theater from today, January 4, to January 10, with multiple showtimes. Tickets are available to cop via the theater’s online store now.

Have you seen BLESSED yet? Let us know in the comments.

Now, find out why and how the film brings skate videos back to their raw roots.

Work From Home
10 Free Videos to Brush Up On Your Skate History Knowledge
LifestylesponsoredMarch 30, 2020
What To Read Next
Load More
Search Results
Load More